My Life as a Magician 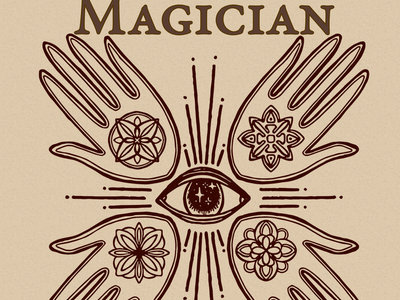 Think: magic realism, cosmic artistry, and a collision of the dark and light arts.

What would you do if your greatest talent – the one thing you naturally excelled at – was a dark art you desperately didn’t want to practise?

That’s the dilemma trapping Arcadia Guzmata. As a young magician who reads minds, she’s all-too-aware of the darker potential her gift carries. It’s a potential her mentor, Mr Bishop, actively nurtures as they travel from town to town, performing magic shows.

Mr Bishop’s own gift is making things disappear; and Arcadia has watched him struggle time and time again to keep it from consuming him. She knows she wants a better life for herself, but what else is there for a young woman with two pigtails and a gift for the dark arts?

Then, one day, as she’s sitting in a café, the most beautiful music she’s ever heard leads to a life-changing conversation. With that one conversation, a whole new world opens up for her.

But can she step into that world and leave her dark gift behind?

↠ Have a sneak peek:

I come from a magical time. A place and time of magic and mystique. Where things that may seem out of the ordinary to you happened as regular everyday occurrences.

Back then I was a magician. I could conjure up all sorts of things. If you wanted it to rain so your crops could grow, I could make it happen. If you wanted to learn new languages so you could travel, I could add them to your tongue. If you wanted to have more food on your plate, I could expand what you've got.

Back then magicians all had their own specialties, and only practised within their scope.

One could say I was a black magician. Reading people's minds is not a noble trick. It was my belief that our minds are sacred and not for the free reading of others. This was, however, my specialty. My gift. My talent. The magic ability that came most naturally to me. It was my burden. My demise.

And so it was. I, Arcadia Guzmata, was a black magician who read people's minds.

“You know what,” he said, shifting forward in his seat as his eyes lit up, “There’s a renowned theoretical professor in Dunkel. Mr Hatter there would be amazing to study with. He’s in the Dunkel University, which is, in my view, a groundbreaking centre for study in mathematics. He works very closely with the cosmology and music departments. I did a short stint of work for him a while back, where I got to help him with one of his instruments, which was an instrument in every sense of the word. It was this giant machine,” Josh was gesturing wildly here, right in his element, “that not only measured time and space fluctuations, but also created musical output, as this was how everything was quantified. It produced real time auditory soundwaves that were a response from the Earth and our immediate surrounds. We could literally hear the Earth move, and hear her interact with the moon and our neighbouring planets. We could even hear how the other planets were interacting with the Earth. This was a literal sound of the spheres.”

“I’ve heard of the music of the spheres!” I exclaimed.

“Yes, many musicians have created their interpretations of it, but this is the actual thing. Now there are many applications for this. This can not only help us interact with the Earth smarter, but it can also help us with our own travel and how we can do this with minimal impact to other planets and the cosmos at large. We can really maintain a pristine environment as we advance more and more. This also helps musicians as we become more in tune with the natural harmonics of the cosmos and therefore of the people. We can add so much more depth to our sound that truly resonates with humans and the Earth and the cosmos all at once. It’s absolutely incredible!”

↠ I would love to share more here, but I don't want to give away any spoilers!

My Life as a Magician is mailed to you in 100% compostable packaging ?

ships out within 3 days

Anna Shelley is known for her meditative ambient music. With a resonance that weaves its way through the souls of all who feel it, Anna Shelley’s music is a feeling - a knowing - a connection.

Ethereal flutes and hypnotic piano float through atmospheric soundscapes inspired by nature and the cosmos.